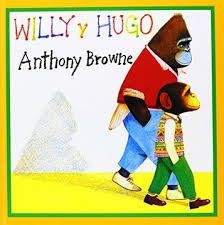 Anthony Browne's most lovable picture-book character is back in an "odd-couple" story of friendship and role reversal. "The appealing "Willy the Wimp" (1984) is back, still a left-out little chimp in a world of sturdy gorillas--at least until he literally runs into huge Hugh".--"Kirkus Reviews", starred review. Full color.